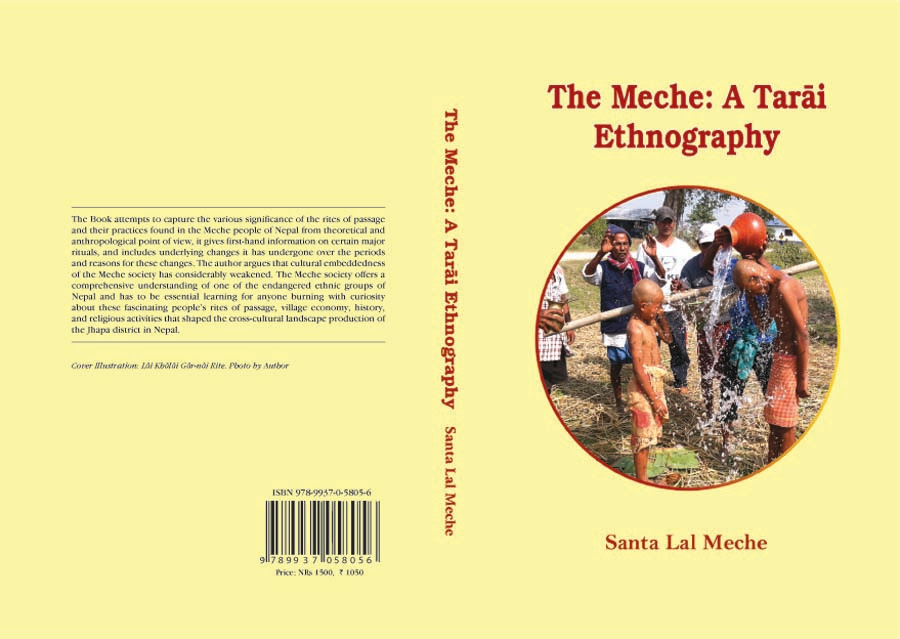 Santa Lal Meche is a well known face in Nepali anthropology as he has already published three books and several articles on socio-cultural aspect of the Meche people of Nepal. His recent The Meche: A Tarāi Ethnography attempts to capture the significance of the rites of the Meche people of Nepal from theoretical and anthropological points of view. The book can of interest to people willing to learn about cultures and traditions of different ethnic groups.

The book gives firsthand information on major rituals, and includes underlying changes it has undergone over the periods and reasons for these changes. In his book, the author argues that the Meche’s rituals are not just an explanation of their ritual and religious aspect, but they also enable them to socially produce and reproduce cultures to be ‘Mecheness’ or ‘Mechehood’.

The book consists of eight chapters. Chapter one highlights the main purpose of the study and the methodology that applied in the empirical research. As a native anthropologist, the author shares his challenging experiences of data collection.

Topography, demography and historical setting of the group have been given in the second chapter. The third chapter deals with the social and religious life of the Meche people. Similarly, chapter four outlines the economy and livelihood.

Narratives on life cycle courses are presented in chapter five. The chapter six elaborates the rites of passage: implication for the theories anthropologically. The notion of life cycle rituals, which is given by Arnold Van Gennep (1990) and Victor Turner (1966) provide an analytical importance for understanding the ways by which life cycle rituals of the Meches engraves for producing the Mechehood in their society by acquiring a strong sense of self-identity and self-worth relative to other social groups, and subsequently, gains an enriched self-esteem supportive of others.

The next chapter is about changing cultural rites over time. The author argues that globalisation, migration, economy, education, communication and technology, and sanskritisation are the elements behind the cultural change of the Meche society. Finally, the conclusion and assessment has been presented in the eighth chapter.

Overall, the author has found the the Meche culture is under a constant pressure from both Hinduism and westernisation. All these development are linked to the diminishment of the locality as they focus on order and experience. The globalisation and western values relating to modern science, rationalism, individualism, equality, free life and freedom of women have exerted a tremendous influence in Meche’s life cycle rituals including the significant influences from the neighboring Hindu communities. Thus, the author claims that they are now sanskritising their rites and rituals themselves and urbanising their ways of life greatly.

The book is important because it allows the reader to understand one of the endangered ethnic groups of Nepal comprehensively. It is fairly well-organised, attractively comprehensive and rich in primary reference materials.

Book: The Meche: A Tarāi Ethnography

Publisher: The Council of the Meche Language and Literature, Jhapa