Subisu Had A Hilarious Response To This Guy’s Complaint

I never have had a chance to use any of Subisu ‘s services yet, fortunately. Just kidding! I would love to. (Ahem!) Anyways, but from what I have heard of and read about its services, I will definitely be thinking for at least a billion times before using them. Wondering why would I say that? Take a look.

If anyone is passing thru baluwatar, could u plz stop at @subisu & tell tech support to pick up the phone. Punch him if u want.

Will there ever be a day without a problem with @subisu internet?

@subisu Just Saw your Advertisement stating “Amazing all the Way “. LOL . I urge @YouTube to put that advertisement in the category : Funny.

These are just a couple of tweets out of the millions.

Anil Katwal, a Facebook user, decided to teach Subisu a lesson and that’s why he messaged them:

“Oh Subisu. Ke Ho I am hearing too many complains of your users,” he wrote. “What kind of service do you provide?”

To this, Subisu had a hilarious reply. This is what they wrote back:

EPIC!! Somebody give Subisu the award for the best troll of the year.

Here’s the screenshot of the conversation. 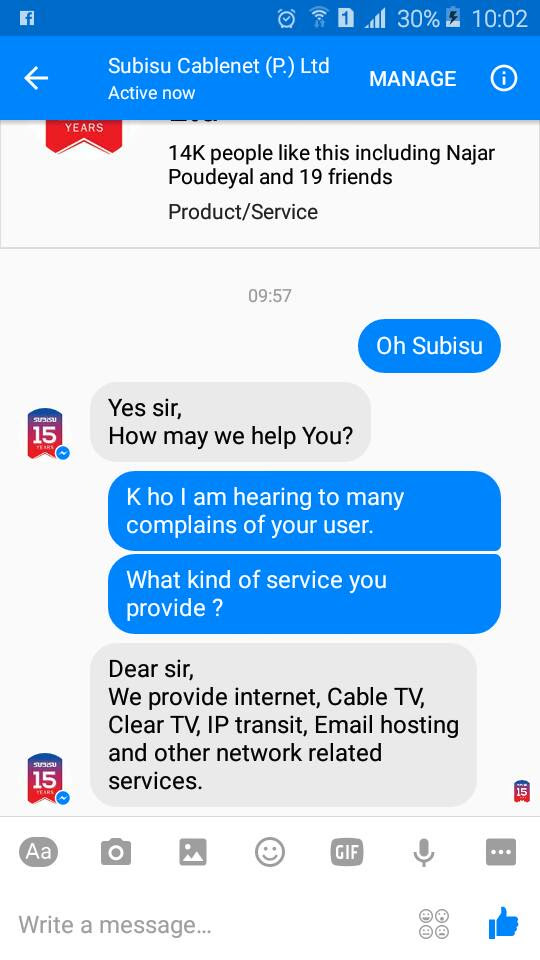 The post Subisu Had A Hilarious Response To This Guy’s Complaint appeared first on NeoStuffs.